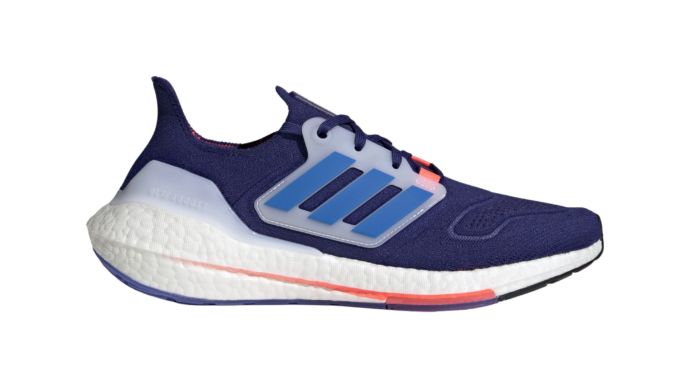 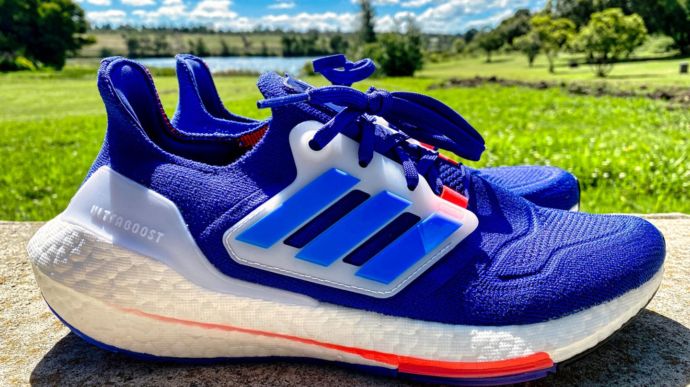 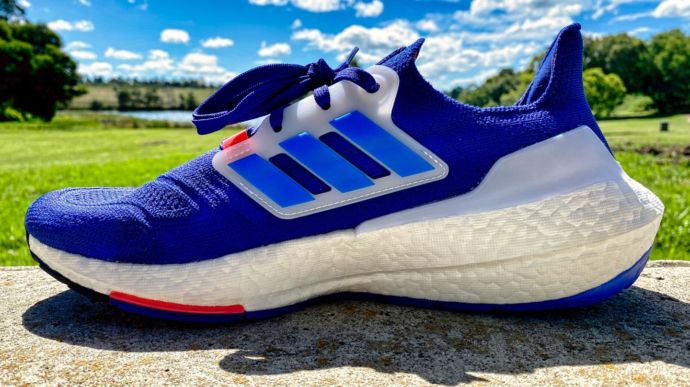 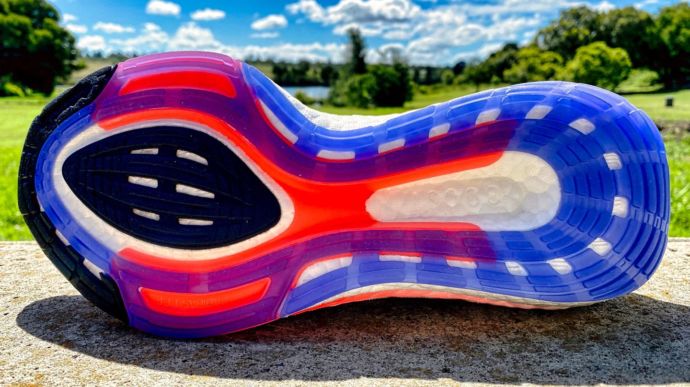 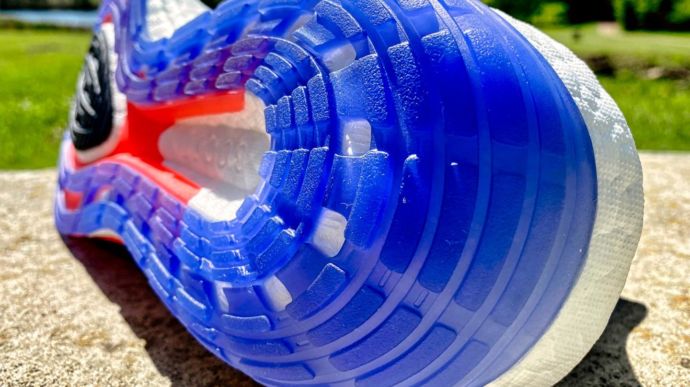 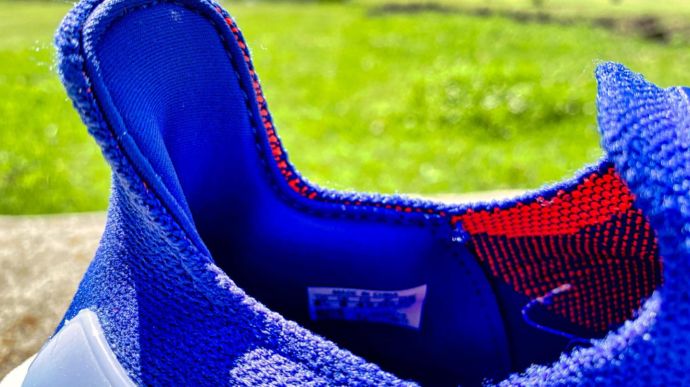 The Adidas Ultraboost 22 is a max-cushioned, heavy-duty trainer for easy and recovery runs. It has a stable ride and is one of the most comfortable running shoes on the market albeit very expensive. The men’s version 22 of the Ultraboost is an upper only update but the women’s version has extra lugs on the outsole. Both versions have a softer ride due to the change of strobel lining and are also a little lighter than version 21 with slightly better heel lockdown.
WHERE TO BUY
LOWEST PRICE
$89
SHOE INFO
Adidas
Brand
adidas Ultraboost 22
Model
Cushioning
Type
11.80 oz. (335 gr.)
Weight
190.00 US$
MSRP
33 mm
Heel
23 mm
Toe
10 mm
Heel Drop
Adidas UltraBoost
Family
Ultraboost 21
Previous model
WHO IS IT FOR
If you're looking for a purely slow, easy day trainer which is very stable and also highly cushioned, the Ultraboost 22 is for you.
Help me choose

When a fast runner in my running club showed me his Ultraboost 4 which has over 3 300 kilometres on them, I gained a new respect for the Ultraboost. His toe box has a hole in the top and the outsole rubber has worn down in a few places but the midsole is still intact and he uses them regularly without getting any injuries.

I always knew that the Ultraboost is a durable running shoe but 3 300 kilometres is unimaginable and about 3 times more than I’ve ever put on a single pair of running shoes.

The Ultraboost may be regarded by many as a “lifestyle” running shoe but there’s no denying that its build quality is second to none and there are few other midsole foams that retain their cushioning as well as Boost.

When I tested the Ultraboost 21 last year, I gave it one of the lowest scores of the entire year because of how firm it felt and how much heel slippage I experienced during runs. As a performance running shoe, the Ultraboost 21 felt like a step backwards for the Ultraboost franchise.

Last year’s Ultraboost 21 was a massive update so this year, the men’s version is only an upper update but there are some small tweaks that change the ride character of the Ultraboost 22. The women’s version has extra outsole lugs on the medial side of the midfoot which makes it more supportive.

The first time I saw pictures of the Ultraboost 22, I struggled to find any differences to the last version apart from the new colourways. The midsole and outsole looked exactly the same while there were subtle changes to the toe box and the eye stays upon closer inspection.

My first run was a 12 km easy run which was surprisingly enjoyable. There were some differences to the Ultraboost 21 which I picked up immediately.

The other difference that I noted was that the heel lockdown felt slightly better. It still wasn’t secure by any stretch of the imagination but it wasn’t as bad as the last version.

The Ultraboost 21 and 22 have exactly the same midsole and outsole but the big difference which influences the ride is the strobel lasting directly underneath the insole, above the midsole.

The only problem with Boost foam is that it’s heavy and dense so it limits the Ultraboost 22’s versatility. I found it only useful for easy or recovery runs above 5.30 per kilometre so it’s a good shoe to stop you from running too fast.

One of the Ultraboost 22’s strengths is how stable it is. There’s very little lean bias because the midsole doesn’t compress much and the deep heel cups your rearfoot. It also has a wide, stable base.

An LEP (Linear Energy Push) plastic shank is on the midfoot of the outsole and it extends into the rearfoot and forefoot. I miss the LEP when I wear trainers which don’t have it, like the Adistar.

The durable outsole of the Ultraboost 22 is mostly crystal rubber with Continental rubber on the forefoot and the toe area. There’s also a hollowed out cavity that extends from the heel to the forefoot which increases cushioning.

You should have no problem getting at least 1000 kilometres out of the Ultraboost 22 because of its excellent build quality and Boost’s ability to retain its cushioning over time.

After my period of testing, I did however notice that the rubber outer lateral heel section was smooth due to the high 10 mm drop and the heel-heavy design which forced me to heel strike.

The new Ultraboost upper is one of the most comfortable of any running shoe for casual wear. There are some cosmetic updates to the upper of the Ultraboost 22 but there is only one major update that affects the fit.

The biggest and most important update is to the heel counter. There is now more padding on the inside of the heel and the heel is angled more toward the achilles. This results in a more secure heel lockdown with only a small amount of heel slippage. There are still no double eyelets so you can’t use a runner’s knot.

The plastic midfoot panels have also been updated. The corners of the panels around the first eyelets are not as pointy as on version 21. The first row of eyelets are now large, circular ones while the last eyelets have speed loop straps for the laces to pass through. This change improves the lacing slightly.

The stretchy mesh design is different to the Ultraboost 21. There aren’t as many perforations for ventilation on the midfoot and on the toe box so the Ultraboost 22 runs slightly warmer than the last version.

The fit is still true to size and more suited to narrow feet than wide feet. It’s not available in additional widths like most Adidas trainers.

The Ultraboost 22, just like the Ultraboost 21 is still seen by most serious runners as a casual, lifestyle trainer. This is mainly because of its near 12 oz weight and its stretchy, knitted upper.

It can still work in a shoe rotation as an easy day or recovery trainer if you don’t mind a heavy shoe- just don’t expect much assistance from the Ultraboost 22 to go faster than 5.30 per km pace.

The big elephant in the room when it comes to the Ultraboost 22 is its price. There’s no reason that the Ultraboost 22 should warrant costing $190. It’s much more expensive than the Nimbus 24, Glycerin 20, Triumph 19 and Infinity Run 2.

These 4 max-cushioned trainers are softer, lighter and more versatile than the Ultraboost 22 but where the Ultraboost 22 beats them all is durability. It’s built like a tank and has the ability to last over 3000 kilometres (if you’re an economical runner).

The Ultraboost 22 is definitely an upgrade over the Ultraboost 21. The heel lockdown is slightly better and it has a softer ride thanks to the Strobel lining change so it’s a better max-cushioned trainer.

As editorial policy, we do not accept free samples from companies.
We purchased this pair of Adidas Ultraboost 22 at Running Warehouse with our own money.

Visit ShopRunningWarehouse.Com
This page contains affiliate links. As an Amazon Associate I earn from qualifying purchases.
WHERE TO BUY
LOWEST PRICE
$89
AVAILABLE ON SALE:Previous model $13

Be the first to leave a review!